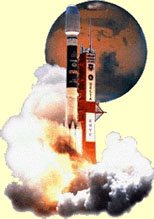 LIVE FROM MARS was active from July 1996 through December 1997, but continues to provide a unique resource with which to study the Red Planet and NASA's Pathfinder and Global Surveyor missions.

LIVE FROM MARS tracks NASA's two 1997 missions to the red planet using video, the Internet, and hands-on activities to allow students to simulate the work of the mission team and bring Mars down to Earth!

"Countdown" takes students to Cape Canaveral - into a high-security clean room for the final pre-launch preparations for Mars Pathfinder, and onto the pad to witness the launch of Mars Global Surveyor. "Cruising Between the Planets" updates the missions and visits NASA's Jet Propulsion Laboratory, home to America's robotic solar system exploration program. Students go behind the scenes during rehearsals for Pathfinder's July 4, 1997, landing, and explore the geology of Mars.

Special programs during "Mars Week" (July 4-12) and fall 1997 continued the project through the landing and into the new school year. An online collaborative project, the "Planet Explorer Toolkit," provides "Mystery Site" challenges which invite students to analyze climate and other data from around the world and to solve science puzzles.

LIVE FROM MARS is supported by NASA, NSF, public television, and other public and private collaborators.